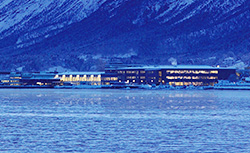 J.E. Ekornes AS has been a part of successfully developing Prevas' EAM Warehouse product solution. Prevas EAM Warehouse consists of a simple user interface that is connected to the Infor EAM maintenance system. The solution simplifies inventory management, returns and inventorying. The type of work that previously took several days to complete can now be performed in less than a day.

J.E. Ekornes AS is the largest furniture manufacturer in the Nordic area, and owns, for example, the Ekornes®, Stressless® and Svane® brands. Stressless is one of the most recognized furniture brands in the world, while Ekornes and Svane are the most well-known brands in Norway. Manufacturing is done at seven factories – six in Norway and one in the U.S. – and the products are sold in selected markets in many parts of the world through the company's own sales companies.

Together with Ekornes' maintenance team we developed a solution, Prevas EAM Warehouse. When connected to Infor EAM, management of removal and returns to the warehouse and inventory taking are simplified. The solution is based on barcodes and handheld units. It is very easy to use and has already generated a profit for J.E. Ekornes AS.

"Prevas' mobile inventorying is very effective. Work that previously took several days to complete can now be performed in seven hours. The process for removing and returning parts has become effective and simple. At the same time, using an iPad and a wireless scanner gives us full control over inventory taking. Our users of the solution are very positive," says Vidar Blindheim, who is the maintenance coordinator at J.E. Ekornes AS.

Prevas will officially launch the Prevas EAM Warehouse solution for customers at an event in Oslo in January 2014. However, the solution is already available for demonstration and can be ordered. At the event in January, the most recent version of Prevas EAM Connector will also be shown – Prevas EAM Connector is a user-friendly interface and a mobile web solution for managing orders, which is specially targeted at the manufacturing industry. It has been warmly received, and has involved more customers in their own manufacturing processes.

"Prevas' EAM Warehouse maintenance product is an excellent example of how we can provide added value to our customers. It is all a matter of creating a process that is as effective and user friendly as possible, with the aim of saving both time and money. With the combination of our two products, EAM Connector and EAM Warehouse, customers receive an exceptionally effective solution that gives results," says Einar Alexander Andersen at Prevas, who is the sales manager in Norway.