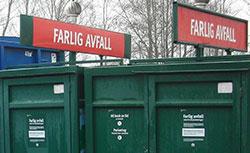 The City of Oslo's Water and Sewerage Works selected Infor EAM as its maintenance system a couple of years ago. The city's wastewater treatment plant had already successfully run the same maintenance system previously. Oslo's Agency for Waste Management, "Renovasjonsetaten", has also decided to implement Infor EAM from Prevas.

In order to simplify work processes, create a uniform flow of information and improve follow-up and analysis, Oslo's Agency for Waste Management initiated a public procurement process to procure a new warehouse and maintenance system. Another objective was to improve storage management and purchasing by automatically creating documentation for purchase orders as well as to develop spare parts management per machine. Accumulating all basic data and documentation in one system and making it available to employees was also a requirement in the procurement.

A great deal of emphasis was attached to the system's ability to provide each user with a web interface adapted to the need each role has for information and functionality.

Choice of warehouse and maintenance system
Competition was stiff, but Infor EAM from Prevas won and the contract was signed at the end of March. EAM Connector was decisive. EAM Connector is a self-instructional interface whose standard version has the precise functionality required by the City of Oslo. The implementation project is in full swing, and the new system will be deployed before summer 2013.

"Our operations will obtain entirely new premises for warehousing, plants and offices. Work will be reorganized so that work orders are distributed to two plants with rotating personnel," says Knut Lorentzen who is a department manager at Oslo's Agency for Waste Management.

"The timing for new system support is perfect; I have worked many years for this," says Knut with a great deal of enthusiasm.

Waste management and recycling – central issues in a capital city with lofty environmental goals
New technology and a higher degree of recycling place new and higher demands on accessibility. New solutions such as color sorting of trash bags impact the entire chain from the consumer to waste management. In addition to thousands of containers with an increasing number of varieties, new vehicles and machinery are being developed that must maintain maximum accessibility. Oslo's Agency for Waste Management has 100 different machines and vehicles that have to be maintained.

About Prevas
With cutting edge expertise in embedded systems and industrial IT, Prevas contributes by providing innovative solutions that create growth. Prevas was founded in 1985, and the company is the main supplier and development partner to leading companies in industries such as life science, telecommunications, automotive, defense, energy and engineering. Offices are located in Sweden, Denmark, Norway and India. The company has approximately 600 employees. Prevas has been listed on the NASDAQ OMX Nordic Exchange in Stockholm since 1998.